Learning Goal: In today's lesson you will learn the definitions of common forms of figurative language. You will also learn how the inclusion of such devices makes your writing more vivid. 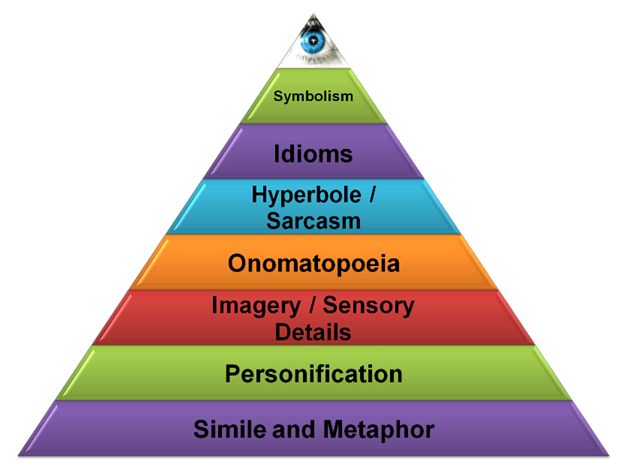 Anaphora
The repetition of the same word or phrase at the beginning of successive clauses or verses. (Contrast with epiphora and epistrophe.) Example: Famous example is from Winston Churchill

The juxtaposition of contrasting ideas in balanced phrases. Examples: "Love is an ideal thing, marriage a real thing" (Goethe), "Everybody doesn't like something, but nobody doesn't like Sara Lee."

Apostrophe
Breaking off discourse to address some absent person or thing, some abstract quality, an inanimate object, or a nonexistent character. Example: "Bright star, would I were steadfast as thou art"
(John Keats)


Assonance
Identity or similarity in sound between internal vowels in neighboring words. Example:  Pink Floyd’s “Hear the lark and harken to the barking of the dark fox gone to ground”

Chiasmus
A verbal pattern in which the second half of an expression is balanced against the first but with the parts reversed. Example:

The substitution of an inoffensive term for one considered offensively explicit. Example: pass away is a euphemism for die.

Hyperbole
An extravagant statement; the use of exaggerated terms for the purpose of emphasis or heightened effect. Example: I have a million things to do tonight.

Irony
The use of words to convey the opposite of their literal meaning. A statement or situation where the meaning is contradicted by the appearance or presentation of the idea. Example:  If, for example a person steps in big puddle of water by mistake, and his/her friend smiles kindly, starts to help his friend up and remarks, "well now, don't you have all the luck!" The comment will probably be taken as funny and ironic and the two will laugh the mishap off. If however, the friend scoffs at his wet, fallen friend, laughs, and says "HA LUCKY YOU!" and yells it really loudly and obnoxiously, it may not be as funny. Verbal irony in its essence requires an understanding of circumstance, attitude, and most importantly, timing.

An implied comparison between two unlike things that actually have something important in common. Example: "Between the lower east side tenements
the sky is a snotty handkerchief." (Marge Piercy, "The Butt of Winter")

Metonymy
A figure of speech in which one word or phrase is substituted for another with which it is closely associated; also, the rhetorical strategy of describing something indirectly by referring to things around it. Example: The metonymic Golden Arches logo of McDonald's Corporation

Onomatopoeia
The use of words that imitate the sounds associated with the objects or actions they refer to. Example: "Chug, chug, chug. Puff, puff, puff. Ding-dong, ding-dong. The little train rumbled over the tracks."("Watty Piper" [Arnold Munk], The Little Engine That Could)

Oxymoron
A figure of speech in which incongruous or contradictory terms appear side by side. Example: Jumbo Shrimp http://www.fun-with-words.com/oxym_example.html

Paradox
A statement that appears to contradict itself. Example:  "I must be cruel to be kind."  (Hamlet)

Personification
A figure of speech in which an inanimate object or abstraction is endowed with human qualities or abilities. Example:  The blizzard swallowed the town.    http://examples.yourdictionary.com/examples-of-personification.html

A play on words, sometimes on different senses of the same word and sometimes on the similar sense or sound of different words. Example:  Kings worry about a receding heir line.

Simile
A stated comparison (usually formed with "like" or "as") between two fundamentally dissimilar things that have certain qualities in common. Example: "The water is like the sun."

Synecdoche
A figure of speech in which a part is used to represent the whole (for example, ABCs foralphabet) or the whole for a part ("England won the World Cup in 1966").

Understatement
A figure of speech in which a writer or a speaker deliberately makes a situation seem less important or serious than it is.  Example:   "It's just a flesh wound." (The Black Knight, after having both arms cut off, in Monty Python and the Holy Grail)