Learning Goal: In this lesson, you will learn what verbals are and how to us them properly in your writing. 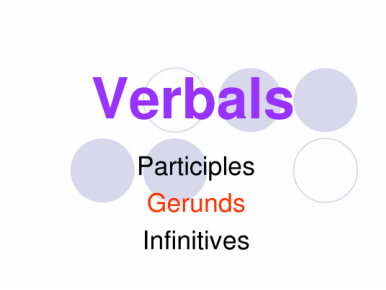 A verbal is a verb form that is not functioning as part of the verb. Three forms of verbals are: participles, gerunds, and infinitives.


Examples:
Laughing with milk in your mouth is not advisable. (subject)
Patti watches wrestling every Saturday. (direct object)
You'll feel better just by smiling. (object of preposition)
Give your writing some flair. (indirect object)


Examples:
To stay would be irresponsible. (noun)
My desire to sleep overcame my desire to eat. (adjective)
The leaves are getting ready to fall. (adverb)
More on Verbals from Owl Purdue
Verbals Practice Quiz
Even more Practice with Verbals: Quiz

A participle phrase consists of the present or past participle of a verb, along with any words that modify the participle. Participle phrases, like participles on their own, always act as adjectives in a sentence.
Example: Holding on for dear life, we tried not to scream as the roller coaster began its steep descent.


A gerund phrase consists of a gerund plus its modifiers. Like gerunds, gerund phrases always function as nouns.
Examples: Performing in front of a live audience makes me nervous.
My little sister never tires of climbing over the furniture.


An infinitive phrase consists of the infinitive form of the verb along with any words that modify the infinitive. Infinitive phrases act as nouns, adjectives, or adverbs in a sentence.
Examples: Noun: To become a black belt requires practice. I love to sing in the shower.
Adjective: The best flour to use for bread is hard flour.
Adverb: You should rest to recover your strength.